Bara – who scored from the centre-circle in the semi-final – was still crying 10 minutes after the classy left-back slotted home the winning penalty that followed a scoreless draw, in which Onana had the best chances and hit the woodwork in each half.

Amos was among the young players in tears long after the teams shook hands and had their photos taken, overcome with emotion after the football academy won their first overseas competition since being founded in October 2013.

“Everyone is crying because everyone is thinking about their parents, their family in Indonesia,” Amos said. “We are all very, very, very good friends. This is our first time becoming champions. This is the highlight of my football career and probably for everyone else here.”

Jang Sunday, the team’s coach, was proud of his young charges, who had beaten fellow Indonesian side Football Plus 3-0 in the semi-finals after topping Group B, during which they beat YFH (Youth Football Home) 3-2 in the round-robin stage.

“We met this team in the group stage and it was very tough. We have young players in a final for the first time and in this competition for the first time, so they were a bit nervous,” said the Cameroonian, a former pro who has spent over a decade in Indonesia.

“This is their first competition overseas. I’m very, very happy for the boys because they are young players going to an international competition for the first time and then to give this type of performance is something to be proud of.”

In contrast to the high-scoring match in the group stage, the final was a virtual stalemate as both teams sought to cancel each other out with risk-free football. Big clearances were frequent and defenders won the majority of battles. 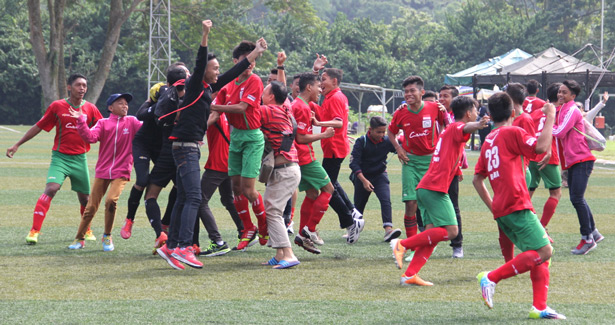 For YFH, it was a second runner-up finish in three years, having lost to German European School in the 2012 final on their debut.

Hannu Tuukkanen, who is also the Sports Manager at YFH, an orphanage with 60 children from the ages of 10-18, believed the better side on the day won the trophy, but was still disappointed.

“In penalties anything can happen, but they had probably better chances to score in the match and they earned the win,” said Tuukkanen, a former pro and professional coach. “We played a little bit different from normally. Both teams didn’t play football at all. They just minimised all risk. Sadly we are second again, but that’s football.”